The name of the fat tire bike comes from its shape similar to the structure of a mountain bike. In the 1980s, the concept of a mountain bike completely changed the world of bicycles. Riding is no longer limited by the road, and mountain bikes can cope with various Mountain trails and off-road roads.

Perhaps inspired by those monster trucks with huge tires, fat tire bicycles (English name FAT BIKE, also translated as fat cars, four-season cars, snow mobiles, ATVs) are powerful enough to over whelm those narrow tires. Nowadays, the influence of fat tire cars is expanding rapidly. Some people think it is domineering, and some people think it is funny. Fat tire cars are affecting more and more people with its unique charm.

Hanebrink, which was born in 1991, has an 8-inch wide tire. It can be called a snow/ATV product at the earliest. In fact, the bicycle with the concept of wide tires has a history of many years. The earliest can be traced back to Hanebrink, which was born in 1991. This desert off-road bike has 20-inch wheels and exaggerated 8-inch wide tires, which can be driven in sand and snow, but the size of the small wheel size limits the development of Hanebrink, and the high price also makes it destined to be small many products. Until 2005, Surly launched the groundbreaking "Pugsley", which followed the wheel diameter standard of modern mountain bikes, used 3.8-inch ultra-wide tires, and matched the CR-MO frame with an eccentric rear fork, which was regarded as a "FAT BIKE" concept. A true ancestor product.

In fact, there was no substantial development of fat tire cars in the first few years, but thanks to global warming, since 2011, the winter time in the frigid region has become longer and summer is shortened, and the demand for the fat tire car market has suddenly increased greatly. Seven years after its birth, fat tire bikes have finally sparked a new round of fashion trends. The birth of new models has made brand manufacturers eager to try, and the advancement in technology and design, the addition of major manufacturers, has made fat tire cars quickly enter the public eye.

The fat tire bike was originally designed for snow riding, but soon became favored by many explorers, and some cyclists also use fat tire bikes for winter training. The oversized 3.8-inch tires create a huge grip area for free running on smooth or loose surfaces. Fat tire bikes are heavier than normal models, and have poor maneuverability and speed, but speed is not the focus of this vehicle. The huge tire air capacity relatively reduces the tire pressure, and the huge "air cushion" creates a strong passability, allowing fat tires to travel freely in snow, sand, mud, woodland and rocky terrain. 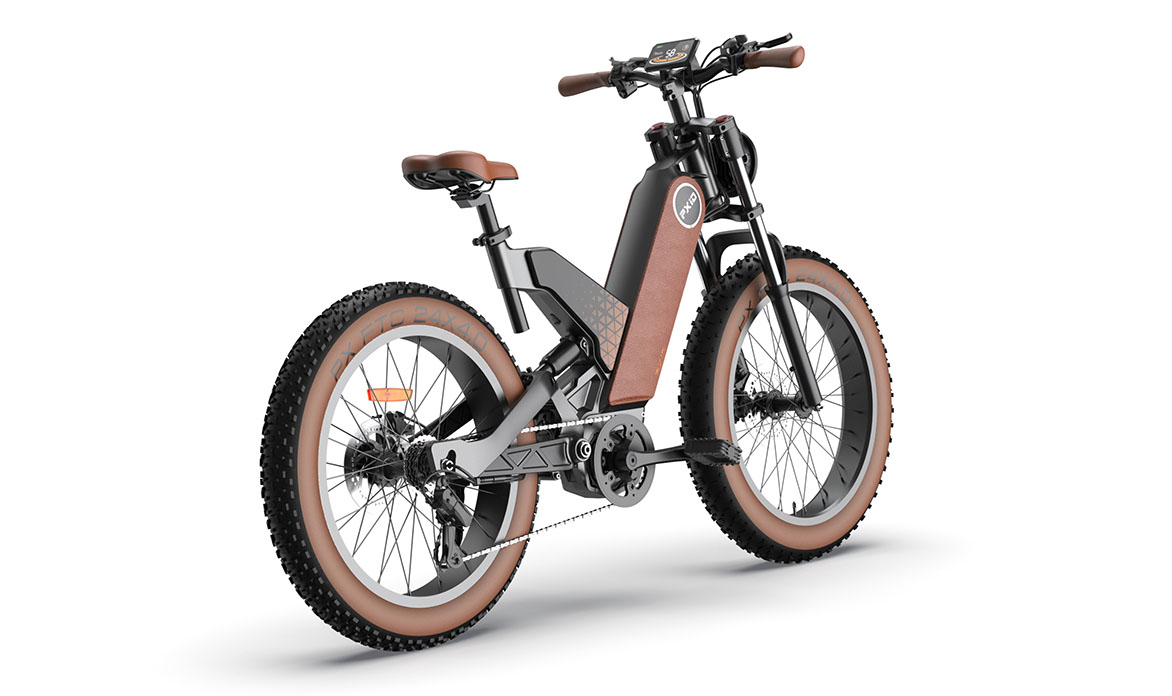 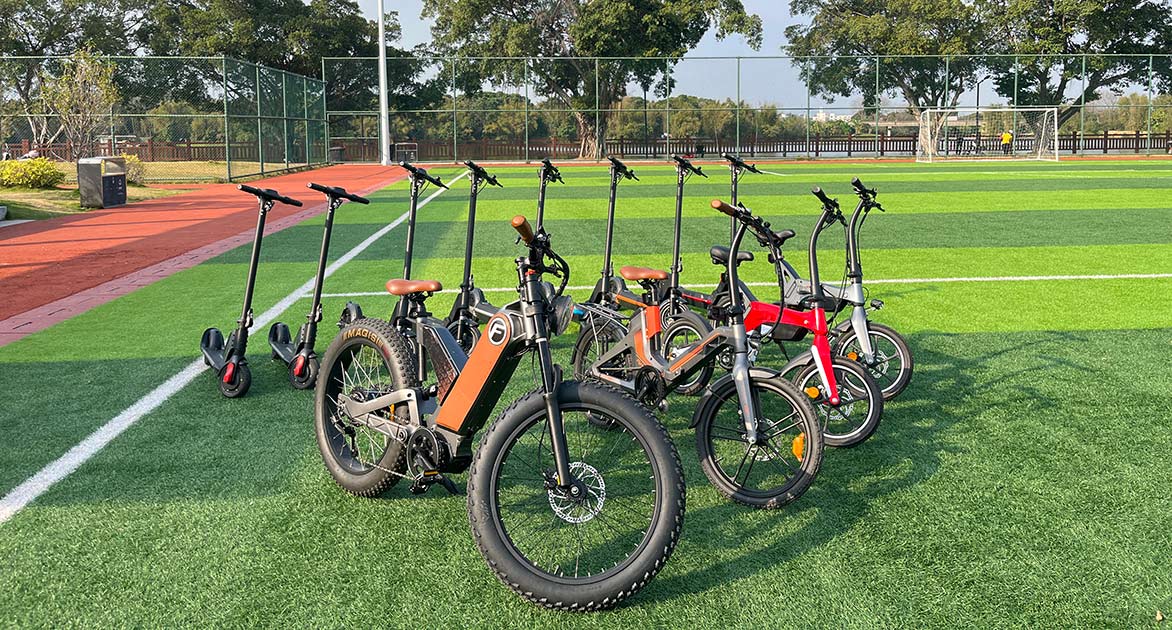 Description: Fat-tire bike has obvious growth momentum in the European and American cycling circle. Its super-wide tread can adapt to a variety of non-paved roads, such as the sands and rocks, while the electrification assisted to solve the drawbacks of fat-tire bike. Fat-P5 fat tire off-road moped is powered by new energy lithium battery, supported by mid-mounted motor, and adopts advanced magnesium alloy integrated die-casting process, which breaks through the traditional tubular frame vehicle modeling and brings more rich and exquisite frame and details treatment. In CMF design, the use of leather cover parts, making the vehicle texture better, to meet the needs of more high-end users. 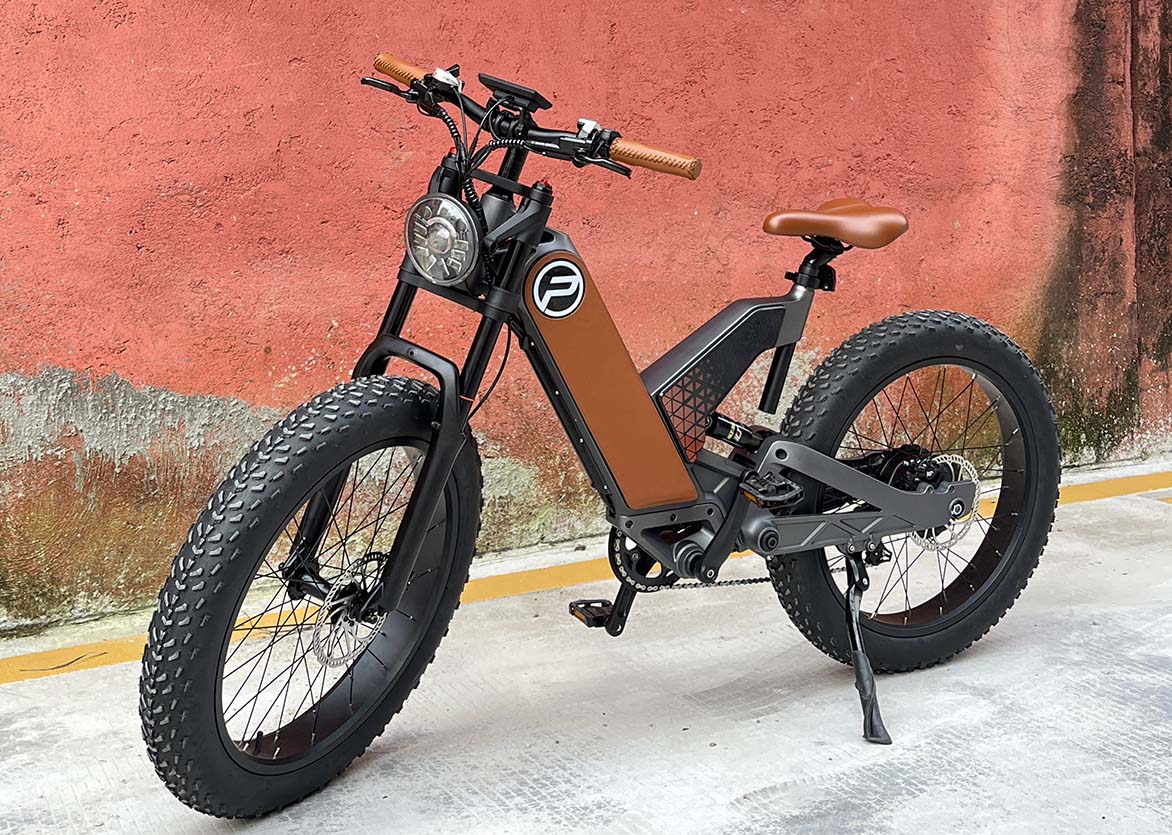 Market value: With the popularity of new energy and global epidemic prevention needs, more and more countries and governments advocate the use of green personal travel tools. New energy personal travel short walking also usher in a greater market demand and development, and for high-end travel tools still has great gap in the field of specific, Fat-P5 fat tire ff road moped precision positioning more high-end leisure off-road areas, meet the needs of this part of the user, in the next two years, P5 will provide higher quality and riding experience to meet this part of the consumer, After gaining sufficient market recognition, we can develop upgraded models with higher quality.

Get our updates and service information at the first time